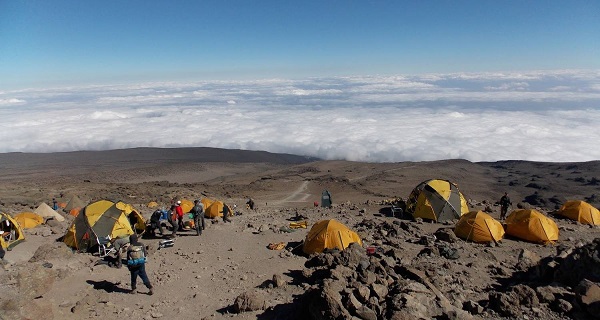 Mount Kenya is 17,057 feet high. It is the highest mountain in Kenya and the second highest in Africa, after Mount Kilimanjaro.An area of 276 square miles around the mountain’s centre is designated as a National Park, as well as a World Heritage site. The park attracts over 16,000 visitors each year.

The several peaks on the mountain were formed by volcanic eruptions, and the mountain is made from different types of volcanic rock. However, the last eruption was over 2 million years ago.
Because Mount Kenya is located on the equator, the sun rises and sets at almost exactly the same time each day, 5:30 am and 5:30 pm.

Four different ethnic tribes live around the mountain. The Gikuyu tribe builds their huts with doorways facing the mountain, as they believe it to be God’s throne on Earth.
The mountain is home to several unique species of animals, including the Sykes Monkey, Cape Buffalo and Bongo Antelope.

Above 7,000 feet, the trees on the slopes of Mount Kenya are covered by high altitude moss.
There are several glaciers on Mount Kenya, although they are retreating quickly and no new ice is forming. In less than 30 years the mountain may be completely free of ice.
The first recorded ascent of Mount Kenya was in 1899. Today, there are several mountaineering routes, and the south side is best climbed in January and February, while August and September are best for the north side.
Although hiking and mountaineering are popular here, wildlife viewing and bird watching are also popular. About 340 species of birds can be seen here.