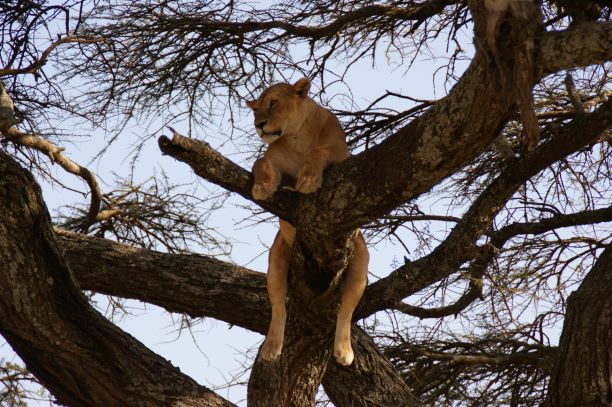 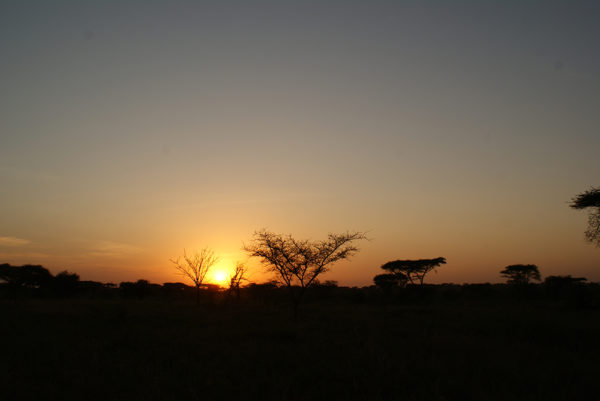 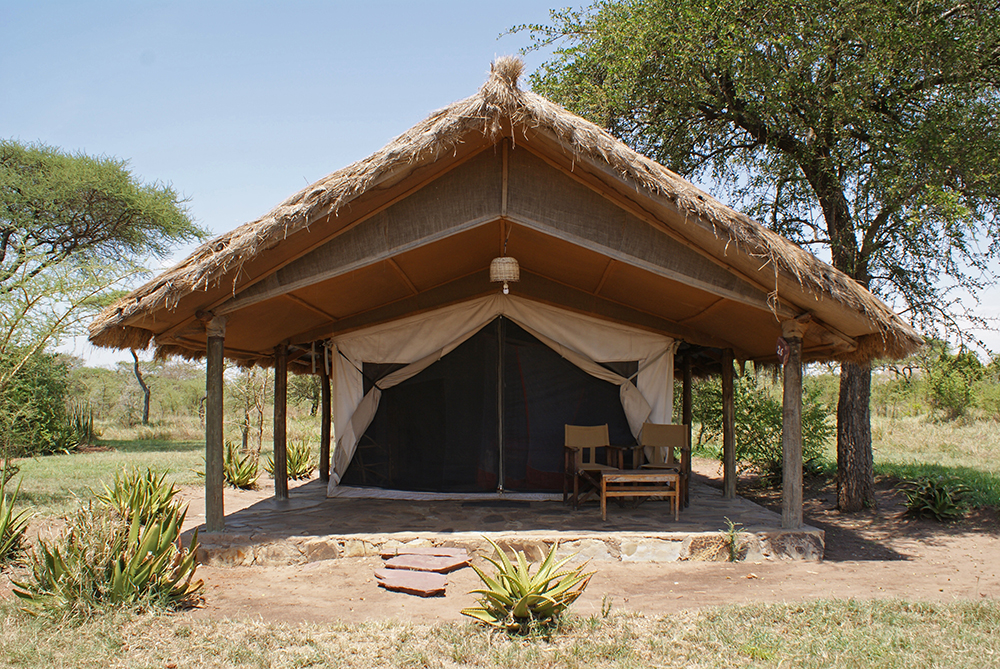 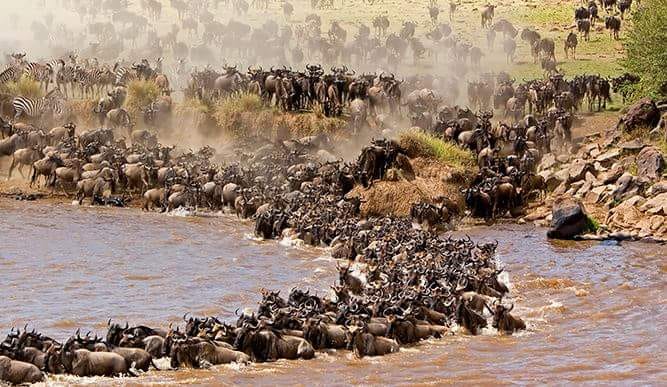 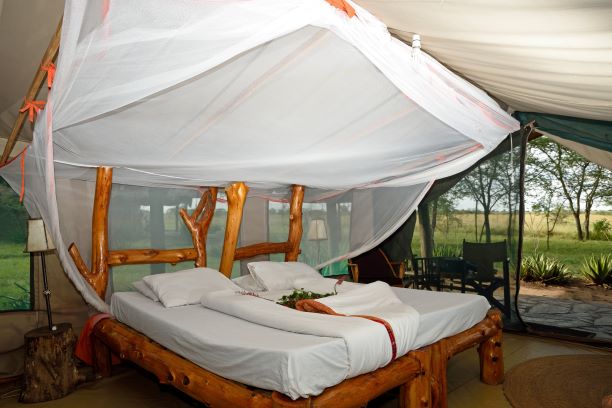 Day 1: Arusha> Lake Manyara. You will be picked up from your hotel in Arusha between 9:00 am and 9:30 am. We are heading to Lake Manyara for your first game drive in Tanzania. Lunch on arrival. Lake Manyara National Park is one of the small parks in Tanzania- no more than 320 km. The beautiful nature, varied flora and exciting fauna makes Lake Manyara an obvious place to spend a day or so on the way to Serengeti and Ngorongoro.
Lake Manyara is located at the bottom of the Great Rift Valley, which stretches from Jordan to Mozambique and has an intriguing ecology and a strong variety of birdlife, it is perfect for bird watching, 380 species have been recorded, and there are periods when thousands of flamingos settled here, forming a pink ribbon along the lake.
The park is best known for the lions, who have a habit of climbing trees.
There is a good chance of spotting elephants (Lake Manyara had the highest concentration in Africa, but illegal poaching has reduced the number of animals.) You will also find hippos, buffalos, giraffes, zebras, gazelles and lots of baboons .
Dinner and overnight at a campsite or in a lodge, depending on what you have booked.

Day 2: Lake Manyara> Serengeti. After breakfast departure with picnic lunch to the Serengeti National Park. While watching a game, we arrive at the campsite or the lodge for dinner and overnight.

Day 3: Serengeti: Today a full day in Serengeti National Parl the most famous of the National Parks in Tanzania. With a total of 3 million mammals (approximately 1.6 million wild animals, 450,000 Thomson gazelles, 25,000 zebras, 109,000 Impala, 7,700 topies, 67,000 buffalo, 31,000 Grant’s gazelles, 12,000 giraffes, 6,000 warthogs.
The many lawns make Serengeti a paradise for predators. Most are hyenas, but the National Park is best known for its lions. You should undoubtedly be able to capture a pair of lions on camera while in the park, Serengeti National park is between 900 and 1850 m above sea level.

The first thing you see on the spot after the ride is – in ten Naabi hill is a vast, flat area of ​​short grass, not a tree in sight for miles. As you approach Seronera in the center of the park, the grass is longer and numerous acacia trees can be seen on the Savannah. The distance from Arusha is 320 km, and the drive takes approximately 6 hours. You can also fly directly to the small air strip at Seronera. Lunch in the park, overnight at the camping pitch or lodge.

Day 5: A full day in the Ngorongoro Crater… There is a very good chance of spotting the big 5 in one day: lion, rhino, elephant, buffalo and leopard. The Ngorongoro Crater is part of the Ngorongoro Conservation Area, which consists of several volcanic mountains and craters – covering an area of ​​8288km ^ 2. Until 1959, this area was part of Serengeti National Park. Out of respect for the local Maasais, its status has changed so that it now protects both the rights of the animals and the Maasais: They are allowed to go down the crater with their livestock to fetch water, but they cannot stay in the crates permanently The cattle must be out of the crater the same day. From Arusha it is approximately 180 km (4-5 hours) to the Ngorongoro Crater. Follow the road to Serengeti past Lake Manyara through the trading town of Karatu. The first view of the crater is at Heroes Point (2286m). Lunch will take place at the picnic place at the bottom of the crater. In the afternoon we drive to Karatu junction budget hotel or lodge for dinner and overnight.

Day 6: Tarangire National Park: Located just 120 km from Arusha and located in the south-east of Lake Manyara, Tarangire National Park is known for its density of wildlife, which is most spectacular between June and December. During this time of the year, thousands of animals migrate from dry Maasai steppe to Tarangire River for water. Covering an area of ​​2,600 sqkm, Tarangire is known for its large herds of elephants and buffalo. Other popular species to see here are lions, giraffes, impalas, wildebeest, zebras and gazelles. It is also the only known reserve where the fringe-eared Oryx is seen. Olduvai Gorge: Located in the Ngorongoro Conservation Area, the Olduvai Gorge is 180 km from Arusha. It was here that Dr. Louis Leakey discovered the remains of Homo habilis aka “Handy man” which was considered the first step up mankind’s ladder of human evolution. Many fossils of prehistoric elephants, giant horned sheep and huge ostriches have also been discovered here.
We do a game drive in the park. Return to Arusha in the afternoon.